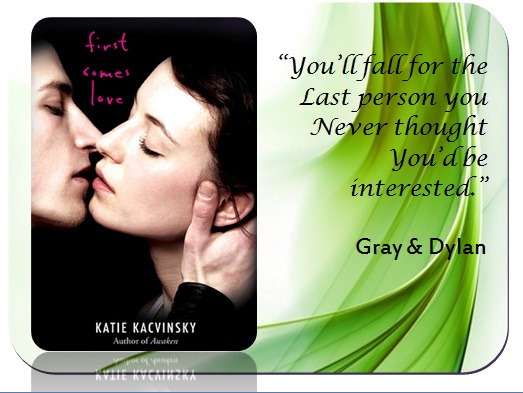 The first thought after reading:


Damn, It could have been made longer.


I swear I was feeling that glorious moment when they finally reunited , hoping that the blissful feeling has been defined more and then the next thing I knew, it's done. No more extended sappy moments. And that is what's holding me back from clicking that full 5 stars rating. But I guess when you've learn to love a book from page one 'til the last, how each word made an impact to your perspective and ideals in life, you'll forget how it sucks it have been that short and you'll end up giving a perfect rating. Like what I did.


Ok, let's get down to the nitty gritty.
The story has been told in interchanging point of views from Gray and Dylan. By the way who's  who?  Gray's heart has been tormented since that day the accident took the life of his twin sister, Amanda. Eight months has passed but his family hasn't made moving on as an option. His mom busied herself with her teaching workload while his dad always find ways to be out on a business trip. And Gray? He shut down his friendly and athletic system at school, he's grieving in silence. He walked out of his dreams to keep what has been left in the strings that attached his family. But he never expect to have a complete 360 when Dylan entered his life.
Dylan is not your ordinary high school girl, her world doesn't revolve on wearing skimpy clothes, make ups and gossips. Dress to impress isn't her motto in life, she'll  rather wear baggy jeans and shirt, steal chances with geckos and freeze those moments with her camera. She doesn't give a damn to what others think of her, she lives one day at a time and being random best described her journey in the world. So when her and Gray's paths met, she saw him as her next challenge - uncover what lies behind those lonely blue eyes.


If I can just dictate what to dream, I'd gladly let my mind be swept away with thoughts of Gray and Dylan. The first time they've set eyes on each other I thought nothing peaceful can set between them. They're coming from opposite ends, one cannot let her day end without spending a bucketful of saliva while the other prefers to let silence eats his whole being. But red and blue poles did attract right?
I got more than a handful of praises ready to blurt out for this book. I am in love with this. Not a first but the way my feelings have been heightened within 24 hours of reading this was a first.


A few days has passed since I finished this but up to now the inspiring thoughts of Dylan has made me rethink what's my stand in this journey called life. I am very fond of collecting quotes I heard from movies, seen from magazines, and read from books. I've highlighted a lot of portion of the book in various shades depending on the impact it has on me. I got a pink, green, and some just with plain red lines. So you better prepare those pens of yours, you've got a lot of highlighting job to do. Moving on, I'll be citing a few lines that I loved the most.

That line that'll make you realize how shallow your thoughts are...
"Anyone can see what's right in front of them, but it's subtle beauty, the kind that takes time to discover, that you have to uncover and dust off, that catches my eye. I find things with cracks and flaws and textures so much more interesting than something polished and perfect and pristine. It's the same way with people"

That line that'll make you believe that there's more to life than what you thought...
"Live a little. You're never going to experience anything if you wait around for perfect conditions."

That line that tells you how important it is to value those people around you...
"It's hard to accept that you've missed out on a person, that you'll ever know of them are pierced-together stories. It's not like missing out on a party or a concert- those are temporary experiences, and you'll have other opportunities. But this is permanent. It's like being robbed of something valuable you never had the privilege to own.

And just some practical lessons in life. :)
"And I don't buy flowers. That's one gift I refuse to spend money on. I'm not going to hand over hard-earned cash for something that dies in a week." - this one's from Gray. Dude, you know something about being romantic? Someone gives this guy a 101 on it. HAHA. I'm sorry to say, I'm the flower-type girl. Can't help it. HAHA

You've read the summary. Got a glimpse of some soul-piercing quotes you'll find in almost every page of the book. So what are you waiting for? Don't let this book just sit on your shelf. It's definitely better than what you are reading now. HAHA. Come on, I know you want to. :)

Posted by Sharlaine Salas at 5:37 AM

Sharlaine Salas
Philippines
The king is at its throne and casts its warm glow over the trees. I smell the goodness of the earth; feel the crisp snap of dry leaves under my foot as I stepped away from the clearing. Blood rushed through my veins and my heart skipped frantically at the sight that unfolds before me. After gathering enough courage, I set my feet on a solid ground free from rocks that might hinder my spur-of-the-moment decision. I run towards the cliff, my heart is on my throat, and let the glorious waves overcome any fear that I've held for so long. And at that sudden burst of emotions, I realized "EXCITEMENT IS GOOD FOR THE SOUL" - Sharlaine